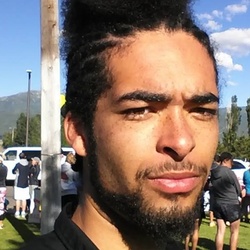 22-year-old Darrien Hunt was shot dead by police in Saratoga Springs, Utah, about 35 miles south of Salt Lake City. For three days, police said nothing about the cause of the shooting while witnesses reported that he was running away as officers shot outside a Panda Express. On Saturday, police issued a brief statement saying he lunged at them with a sword. But Hunt’s lawyer says an independent autopsy shows Hunt was shot in the back and not in the front, and his mother Susan Hunt says the “sword” was a blunt-edged vanity version of a Japanese “Katana” sword he bought at an Asian gift shop.

The official state autopsy documents six gunshot wounds on the body of 22-year-old Darrien Hunt and finds at least four of the shots entered his body from behind, generally confirming the results of an independent autopsy released by his family. It found no drugs in his system. A narrative in the autopsy states an officer fired three shots when Hunt charged at him, swinging the sword, as the officer got out of his car. Hunt ran away and police fired four more times as they chased him, the report says.

Hunt's mom rejected a $900,000 settlement offer in the case, saying it was too restrictive. Susan Hunt told a news outlet that the deal contained an unacceptable provision, a requirement that she refrain from commenting about the death of her son.

An attorney for Saratoga Springs has asked a federal court judge to enforce the settlement agreement in the death of Darrien Hunt. Though, Hunts mother said she rejected the settlement, attorney Heather White said in a motion filed last week in U.S. District Court that the parties had agreed on a settlement amount in early August and a check was sent to the Hunt's counsel, Robert Sykes, on Aug. 21.

It was reported on February 22, 2016 that a federal judge ordered Susan Hunt to take a $900,000 settlement previously agreed to by her and Saratoga Springs over the 2014 officer-involved shooting death of her son, Darrien Hunt.

On August 22, 2016, a federal judge denied Susan Hunt the chance to refile a lawsuit against Saratoga Springs and its police force for the shooting death of her son Darrien Hunt. Mrs. Hunt can appeal the decision.

In June 2020, a petition called for action in the death of Darrien Hunt. As of the reporting, more than 360,000 people had signed the change.org petition calling ‘Justice for Darrien Hunt – to Reopen His Case’ involving Saratoga Springs police officers.