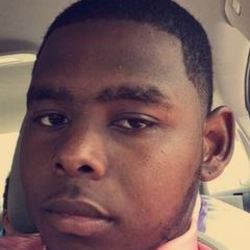 He was rushed to Franciscan Health Olympia Fields and died a few hours later, the chief said. The Illinois State Police Public Integrity Task Force is investigating the shooting.

Rogers said Washington was one of several individuals officers had seen huddling around a dark SUV in the 1600 block of 5th Avenue while conducting a narcotics investigation.

At least four of the individuals, including Washington, scattered after seeing police, Rogers said.

Veronica Goodson, who identified herself as Washington’s fiancé, said his family had been seeking answers about what happened, but had not received any information from police.

She was not with Washington on the night of his death, but said she had spoken with him by phone just minutes before he was shot and had planned to pick him up later from a neighborhood block party he’d been attending.

Goodson said others at the block party told her Chicago Heights police officers, who appeared to have been surveilling the gathering, jumped out of a black truck and sent attendees running.

She said she hadn’t spoken with anyone who witnessed police shoot Washington, but expressed skepticism about the department’s narrative of events.

Chief Rogers said officers chased the four people from the scene and soon spotted Washington, who had stopped running, standing in a grass field armed with a handgun.
Police ordered him to drop his weapon multiple times, the chief said, but Washington instead opened fire on them.