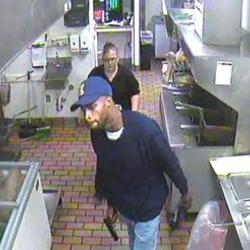 A release from Champaign police said Mr. Graves was shot as he came out of a second-floor room at the Days Inn on Champaign Avenue holding what "appeared to be a gun" and running toward police and the stairwell. Rantoul police had gone to the motel about 3 a.m. Tuesday, August 4, 2015, acting on two anonymous tips that Mr. Graves was there and that he was the man who robbed the Rantoul Hardee's on Sunday night, August 2. That robbery occurred about 10:35 p.m. and was captured on a surveillance camera inside the business. Accoring to police, Graves was captured on Hardee's surveillance footage holding an employee at gunpoint and demanding cash and other items. Upon being contacted by Rantoul officers, Mr. Graves barricaded himself in the motel room and threatened the officers who believed they had seen a gun in his waistband. Those officers backed off to avoid confrontation and the county's two specialized weapons units were summoned. The METRO team, made up of officers from Rantoul, Urbana, Parkland College and the University of Illinois police departments and the Champaign County sheriff's office, responded first. They were later joined by members of the Champaign police department's SWAT team. After negotiating six hours with Graves to no avail, police tossed tear gas into the room to get Mr. Graves out. That's when he was shot by Sgt. Colby Oleson.