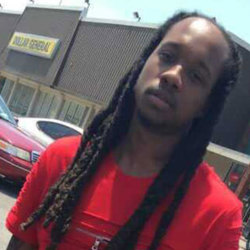 Police identified Andrew Delke, 25, who is white, as the officer who shot and killed Daniel Hambrick, also 25, who is black. Delke, who graduated from the police academy in December 2016, is on administrative leave while the Tennessee Bureau of Investigation looks into the shooting.

The shooting of a black man by a white officer sparked anger among community activists who say police are racially biased. Many continued their calls for the implementation of body cameras for every officer and civilian oversight of the police department.

There is no body camera or dash camera footage of the shooting. But, according to the TBI's latest account, surveillance footage around the John Henry Hale Apartments captured at least part of the encounter.

Delke drove into the parking lot of the apartment complex around 7 p.m. after spotting a white Chevrolet Impala that had been "driving erratically" in the area earlier and had refused to stop for police, according to the TBI.

Video showed Hambrick and two other men getting out of the car as Delke approached.

When Hambrick turned to run, the TBI said, cameras showed Delke chasing him on foot. An earlier account of the shooting did not include details about a chase.

"At one point, based upon the video, Hambrick appears to have a dark-colored object in his hand," the TBI said in a statement. "The situation escalated further, for reasons still under investigation, and resulted in the officer firing his service weapon several times."

A study by a doctoral student at Vanderbilt University suggests that Delke was biasing his enforcement against African Americans. In particular, between March 2017 and July 2018, Delke made a total of 510 traffic stops, according to the data. Of those, 364 were of African-American drivers and 118 were of white drivers. Moreover, the data showed Delke searched the Black drivers he stopped at nearly three times the rate of his fellow officers — 10.7 percent compared to 3.8 percent. Delke conducted 39 searches of Black drivers in all and just three searches of white drivers.

On September 27, 2018, District Attorney Glenn Funk’s office filed a criminal homicide charge alleging that Nashville Officer Andrew Delke, 25, broke the law on July 26 when he shot Daniel Hambrick, who was running away during a foot chase.

On January 18, 2019, Officer Andrew Delke was indicted on first-degree murder charge in the fatal shooting of Daniel Hambrick.

On February 26, 2019, Judge Monte Watkins said he would seal evidence filed in the murder case against Delke. Lawyers on either side of a criminal case are required to exchange evidence during a process known as discovery. In Nashville, the discovery process is public in nearly every criminal case.

However, defense attorneys argued that allowing evidence to be filed with the court clerk, and therefore available to reporters and other members of the public, would jeopardize Delke's right to a fair trial because potential jurors might see evidence that is later deemed inadmissible at trial.

On March 11, 2019, the Hambrick family sued the officer and the city of Nashville, saying its Police Department discriminates against black people and that its officers are too quick to use lethal force.

In August 2019, a Nashville judge scheduled a hearing to decide whether there would be a change of venue in the case of the Metro police officer charged with murder.