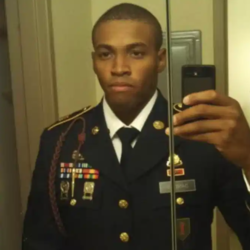 Sergeant Damian Lamar Daniels was a 31-year-old combat veteran who was shot and killed by authorities in front of his home in San Antonio, Texas, on Tuesday evening, after authorities responded to mental health calls.

On Monday, August 24, 2020, the Bexar County Sheriff's Office (BCSO) received a call from a family member that Sergeant Daniels, was having suicidal thoughts.  When deputies arrived at his home, Daniels did not answer.  He called the BSCO later that night, reporting that he was seeing ghosts and hearing voices.  However, when they arrived, the deputies were able to speak with Daniels, who reported that he had his medications and did not want to go to the hospital.  The deputies provided Daniels's family with information on how to obtain a mental health warrant.  After the deputies left, a neighbor reportedly heard gunshots but did not contact the deputies.

The next day, Tuesday, August 25, 2020, both the Red Cross and Daniels' mother called the BSCO.  The first time they responded, they were unable to speak with Daniels, but the second time, his mother stated that he was willing to talk with them.  When the deputies arrived at his home, they noticed that Daniels had a weapon due to a large bulge underneath this shirt.  According to County Sheriff Javier Salazar, camera footage shows the deputies trying to speak with Daniels, who was not lucid.  After a while, the three deputies and Daniels got into a struggle as they attempted to disarm Daniels and take him into custody.  Body cam footage shows a pocket knife on the ground next to Daniels, who is seen apparently trying to hold onto a gun through his shirt.  The deputies claimed that they tried to tase Daniels, which had no effect, and they believed that he could reasonably fire the weapon at them from beneath his shirt.  Salazar remarked that the deputies pleaded with Daniels to drop the gun before they took out their own weapons and shot him.

The Bexar County Sheriff’s Office identified John A. Rodriguez, 52, a 14-year member of the force, as the deputy who fired the shot that killed a knife-wielding 30-year-old Damian Daniels on Aug. 22 as he and two other deputies struggled to detain Daniels for mental health treatment.

The case is expected to head before a grand jury.

After reviewing the circumstances surrounding Daniels' death, Bexar County Judge Nelson Wolff called for a review of the county's Mental Health Department policies for responding to calls of a person in psychiatric distress.