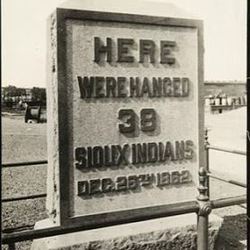 On September 28, 1862, Colonel Sibley appointed a five-member military commission to "try summarily" Dakota and mixed-bloods for "murder and other outrages" committed against Americans.  Whether Sibley had authority to appoint such a commission is a matter of substantial dispute.  The commission was convened immediately, meeting first near Camp Release (close to modern-day Montevideo, Minnesota). [PHOTO OF LOG COURTHOUSE]   Later, the trials were moved to the the summer kitchen cabin of trader Francois LaBathe, at the Lower Sioux Agency.  Sixteen trials were conducted the first day at Camp Release, resulting in convictions and death sentences for ten prisoners and acquittals for another six.  Over the six weeks that followed, the military court would try a total of 393 cases, convicting 323 and sentencing 303 to death by hanging. Reverend Stephen Riggs, a man who spoke Dakota and was not unsympathetic to their plight, reportedly served as a virtual grand jury, gathering evidence and witnesses.

The trials were quick affairs, getting quicker as they progressed.  The commission heard nearly forty cases on November 3, the last day it met. The commission believed that mere participation in a battle justified a death sentence, so in the many cases, perhaps two-thirds of the total, where the prisoner admitted firing shots it proceeded to a guilty verdict in a matter of a few minutes.  Somewhat more deliberation was required for trials in which the charge was the murder or rape of settlers, because admissions were much rarer in these cases.  After the defendant gave whatever response he cared to make to the charge, prosecution witnesses were called.  Where prosecution witnesses contradicted the testimony of the defendant, the commission almost invariably found the prisoner to be guilty.  The best witnesses for the prosecution turned out to be some of the accused.  A mixed-blood named Godfrey, or Otakle, who was the first prisoner tried [GODFREY'S CASE], gave evidence in fifty-five cases and was described by Recorder Isaac Heard as "the greatest institution of the commission."  With his "melodious voice" and "remarkable memory" he seemed to Heard "specifically designed as an instrument of justice." [HEARD'S ACCOUNT OF TRIALS]

Critics have challenged the fairness of the trials.  In addition to raising concerns about the sufficiency of the evidence supporting convictions and the rapidity of trials, critics have charged commission members of harboring prejudice against the defendants.  The critics may have a point. The commission members, though men of integrity, were also military men whose troops had recently been under attack by the very men whose cases they were judging. Critics of the trials also have argued that the commission was wrong to treat the defendants as common criminals rather than as the legitimate belligerents of a sovereign power.  Finally, they have suggested that the trials should have been conducted in state courts using normal rules of criminal procedure rather than by military commission. [WERE THE TRIALS FAIR?]

Colonel Sibley may well have viewed summary trials by a commission as necessary to avoid vigilante justice by angry mobs of Minnesotans.  As it was, the 303 condemned prisoners were attacked in New Ulm on November 9 as they being transported to Mankato to await their execution[SKETCH OF ATTACK IN NEW ULM].  Another planned attack of the prison camp by several hundred armed local citizens on December 4 was foiled by soldiers guarding the Dakota prisoners.

In Mankato, at ten o'clock on December 26, thirty-eight (one person was reprieved between the date of Lincoln's order and the execution) prisoners wearing white muslin coverings and singing Dakota death songs were led to gallows in a circular scaffold and took the places assigned to them on the platform.  Ropes were placed around each of the thirty-eight necks.   At the signal of three drumbeats, a single blow from an ax cut the rope that held the platform and the prisoners (except for one whose rope had broke, and who consequently had to be restrung) fell to their deaths.  A loud cheer went up from the thousands of spectators gathered to witness the event. The bodies were buried in a mass grave on the edge of town.  Soon area doctors, including one named Mayo, arrived to collect cadavers for their medical research. [ACCOUNT OF EXECUTIONS]