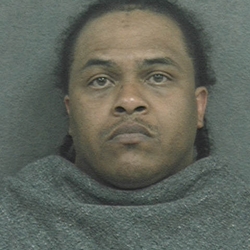 Man dies after struggle with Kansas City, Kan., police. Police say the man tried to flee after they stopped him for a traffic violation.

An unexplained death of a man in police custody in 2014 now has turned into an alleged police brutality case against the Kansas City, Kan., police department.

A Kansas City, Kan., woman is suing the city, claiming police negligently and wrongfully killed her longtime boyfriend during a traffic stop.

The woman, Phyllis Salazar, says she watched as officers tackled Craig McKinnis, 44, to the ground. The rest she could only hear as she sat on a curb at the orders of police.

"If you can talk, you can breath (sic)," an officer replied.

Salazar didn't learn of McKinnis' death until later, when she was under questioning at the police department, court documents say.

As he fought with officers, McKinnis kicked so much he was placed into leg shackles, Officer Steven Sheldon's report says. The report also acknowledges that McKinnis said he could not breathe.

"I told him that we could not help him if he continued to fight with officers," Sheldon wrote.

After she sat on the curb, Salazar said she could still hear McKinnis tell officers that he could not breathe. Each time she tried to stand, police ordered her to sit back down, she said.

Soon McKinnis' face began to swell, Sheldon wrote in his report. Eventually he began to calm and officers tried to roll him onto his side to get him off the ground.

"When we tried to roll him, we found that he was non-responsive," Sheldon wrote.

"The next thing I seen was them working on his heart," Salazar told police.

After approximately one minute, Sheldon said he found McKinnis had no pulse and was not breathing, and another officer began administering CPR.

"From the time I arrived, to the time (McKinnis) quit resisting and became unresponsive, about three minutes passed," Sheldon wrote.

Around this time Salazar heard an officer tell another to "get her out of here before the press gets here," her lawsuit says. She was ushered into a police car, where she says she sat for about 30 minutes before she was driven to the police station for questioning.

The autopsy, performed by Dr. Erik Mitchell, found that McKinnis could not breathe because of his body position, which caused his heart to stop.

The manner of McKinnis' death was accidental, Mitchell wrote.

Though Mitchell found a number of significant bruises in the internal structure of McKinnis' neck, he could not differentiate between any neck pressure that may have been applied and the effects of "vigorous resuscitation."

Officers involved said nobody held or compressed McKinnis' neck, though his legs were restrained and his shoulders were held down, Mitchell wrote.

Combining McKinnis' large figure, his position on the ground — with his hands behind his back — and pressure on his shoulders, Mitchell wrote "significant restriction of respiration may take place."

Reviewing police car video of the incident, Mitchell wrote that he could hear McKinnis complain that he could not breathe "though he continues to talk for a time before he becomes unresponsive."

The video itself "has no clear picture of what transpires physically," he wrote.

A search of Salazar's car after the stop turned up neither drugs nor weapons, police reports say.

Now, Salazar is suing, claiming police violated McKinnis' civil rights during the May 2014 traffic stop and that their "outrageous" conduct wrongfully resulted in his death. The lawsuit identifies Salazar as McKinnis' common-law wife.

In a separate lawsuit with similar claims, McKinnis' family is also suing.