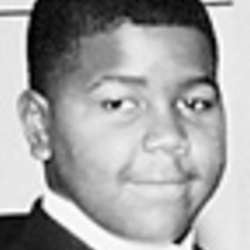 On the night of Sept. 1, 2000, the 12-year-old sneaked out of his parents' Bahama Terrace apartment and into the driver's seat of a relative's car. He drove to a Mount Airy convenience store on Colerain Avenue.

Cincinnati Police Officer Kevin Crayon saw the boy at the store and asked to see his driver's license. Courtney put the car in reverse. Officer Crayon reached into the car, apparently trying to grab the keys or shift the car into park.

Courtney sped off with the officer tangled in the steering wheel. Eight hundred feet later, as the car weaved down Colerain and approached a busy intersection, Officer Crayon managed to pull out his gun and shoot Courtney point-blank in the chest.

The shot dislodged the 40-year-old officer, who died when his head hit the exhaust pipe of a car waiting to turn left at the intersection. He was the fourth policeman killed in three years.

Courtney managed to drive home. He collapsed in the living room and died four hours later.