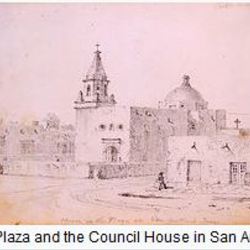 This pertains a tragic event known as the Council House Fight where Comanche leaders and men women and children led by a peace chief Mukwahruh went to San Antonio in March of 1840 to make peace with the Texans. What ensued was a blood bath where men women and children were shot down because they did not want to be taken as prisoners.

To some of us this seems a case of Texans glutting their vengeance for past battles with the Comanche.


From the Texas State Historic Association:

In the Council House Fight thirty Penateka Comanche leaders and warriors, as well as some five women and children of the tribe, were killed by Texas troops at San Antonio on March 19, 1840. The event is said to have hardened Comanche hostility to whites in Texas. From the time of the first white settlements in Texas Comanche warriors and American frontiersmen had skirmished.

In 1840 the Penatekas, driven by the fear of Cheyenne and Arapaho attacks along the northern frontier of Comanche territory, the losses suffered in several smallpox epidemics, and the successes of Texas Rangers against them, sought to make peace with Texas. When Comanche peace representatives arrived at San Antonio in January 1840, commissioners of the Texas government demanded the return of all captives held by the Penatekas. In addition, Texas officials insisted that the Comanches abandon Central Texas, cease interfering with Texan incursions, and avoid all white settlements.

In response to the Texans, thirty-three Penateka chiefs and warriors, accompanied by thirty-two other Comanches, arrived in San Antonio on March 19, 1840. The prominent peace chief Muk-wah-ruh headed the delegation, which brought only a few prisoners, namely several Mexican children and Matilda Lockhart , a sixteen-year-old white girl. Matilda, who had been captured with her sister in 1838, claimed that her captors had physically and sexually abused her. Burn scars, coupled with the mutilation of her nose, supported her stories. She also said that fifteen other captives remained in Comanche hands and that the tribe's leaders intended to ransom these hostages one at a time.

When Texan commissioners demanded the release of the other captives Matilda had mentioned, Muk-wah-ruh replied that these prisoners were held by Comanche bands beyond his authority. Failing to comprehend the diffuse nature of Comanche political authority, the commissioners rejected the chief's explanation. Texas soldiers entered the Council House, where the peace talks were being held, and the commissioners informed the assembled chiefs that they were to be held as hostages until the remaining captives were released.

In response to these threats, the Comanche chiefs attempted to escape and called to their fellow tribesmen outside the house for help. In the ensuing melee, Texans attacked several Indians while soldiers killed most of the Comanches who remained in the Council House courtyard. A single Comanche woman was freed by Texas authorities and ordered to secure the release of the white captives in exchange for twenty-seven Comanches captured in the fight. The Penateka leaders refused to respond to Texas demands, and most of the Texans' captives escaped.

The Council House Fight outraged Comanche sensibilities, for they considered ambassadors immune from acts of war. Led by Buffalo Hump, the Penatekas retaliated by raiding deep into Texas. Comanche hatred of Texans, who were regarded as treacherous, continued throughout the warfare era and contributed much to the violence of the frontier.