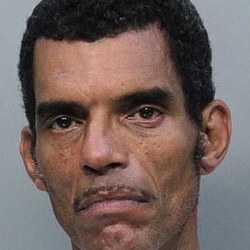 An armed robbery at a Walgreens in Miami led to a deadly police shootout Tuesday morning.

Dozens of officers converged under the MLK station at 27th avenue — all aiming at a the blue Volvo with two men inside.

“They were shooting at the cops and the cops just shot the whole car up,” Tracey said.

It was nearly 6:30 a.m. – the end of the hunt that started two hours earlier at a Miami Walgreens four and a half miles away. A surveillance camera there ahd a clear shot of a terrified night clerk being held at gunpoint.

Police found that gunman half an hour later at a trailer park 22 blocks away. He fired, shot the officer and took off in the officer’s squad car.

That officer was later identified as Saul Rodriguez, a 13-year-veteran of the Miami-Dade Police Department. He was shot in the stomach and was listed in stable condition at Jackson Memorial Hospital.

The man then ditched the car in Hialeah. He next surfaced in his family’s Volvo convertible which he had picked up along the way and wrecked against a pole. There was also another man in the car. More gunfire was exchanged with police.

One of the suspects was killed and the other was transported to Jackson Memorial Hospital, where he died.

Friends identified one of the men as 27-year-old Adrian Montesano (pictured below). The Volvo was registered to his family.

But what police didn’t realize before they started shooting at the Volvo is there was a second man in the car – Corsini Valdes – who had committed no crime.

And in fact, as CBS4 News was the first to report, both men inside the Volvo were unarmed at the time police caught up with them. All of the gunfire came from police.

But Montesano and Valdes weren’t the only ones struck – two Miami Dade police officers were hit as well – caught in the crossfire. One officer was shot in the arm and the second was hit in the arm and grazed in the head. If the bullet had struck just a half an inch to the side the officer would have been killed.

The sound of the gunfire was deafening – literally deafening. Two Miami police officers sustained ruptured ear drums from the cacophony of shots.https://usgunviolence.wordpress.com/2013/12/10/mass-shooting-killed-corsini-valdes-miami-fl/