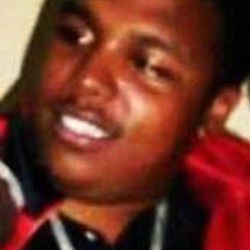 A home invasion suspect was shot and killed Saturday during an early-morning scuffle with Paulding County sheriff’s deputies, authorities said.

A lookout was issued for a vehicle and suspect believed to have been involved in a home invasion on Hiram-Powder Springs Road in Cobb County, and Paulding deputies spotted the vehicle around 1 a.m. and followed it to a home on Echo Ridge Drive, just across the county line from Cobb, GBI spokeswoman Sherry Lang told Channel 2 Action News.

When deputies approached the vehicle, the suspect, identified as 24-year-old Corey Thomas, ran into a wooded area, Lang said.

The deputies pursued Thomas on foot and Tased him, but the Tasers were ineffective, according to Lang.

She said Thomas took a gun from one of the officers during a scuffle and fired the gun, but missed the deputy.

The two deputies suffered minor injuries during the scuffle with Thomas, Lang said