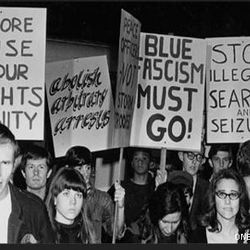 Talk about hidden history: Fifty years ago this month—no one is sure of the exact date—a full-scale riot took place in San Francisco at Gene Compton’s Cafeteria, on the corner of Taylor and Turk in the Tenderloin.

Three years before Stonewall, the crowd who hung out at Compton’s—drag queens, transgender women, gay hustlers—finally got sick of the constant harassment and the way the cops would throw them in jail for any reason: wearing lipstick or mascara, or even a blouse that buttoned on the “wrong” side.

Compton’s was a place where you could don your makeup, wear that blouse, and sit for hours—all night if you wanted—over a cup of coffee, waiting for your friends to come in from a hard night of streetwalking. (Barred from practically any form of employment, many denizens of the Tenderloin were sex workers.)

It is said that on that hot night a half century ago, an officer grabbed a drag queen, the fed-up victim threw a cup of coffee in his face, and the rebellion began. The riot poured into the street: Before it was over, sugar shakers smashed through plate-glass windows, a police car was destroyed, and a corner newsstand was burned to the ground.

It is almost impossible to imagine the constant humiliation that attended being LGBT back in those bad old days, when so many Americans—who thought of themselves as good people!—believed you and members of your despised community were repulsive deviants, pathetic at best, your rightful place in prison or in a mental institution. The very notion of gay marriage, the idea of anti-discrimination legal protections, the inalienable right to dress as you please, to live as you pleased, would have been considered fantastical and ridiculous.

“There was a lot of joy after it happened . . . it was just a moment of coming together,” one participant remembers in Victor Silverman and Susan Stryker’s excellent 2005 documentary, Screaming Queens: The Riot at Compton’s Cafeteria. San Francisco police records from the 1960s apparently don’t exist, and no newspaper at the time wrote about the uprising, but on June 22, 2006, a historical marker on the site was erected. It reads, “Gene Compton’s Cafeteria Riot 1966: Here marks the site of Gene Compton’s Cafeteria, where a riot took place one August night when transgender women and gay men stood up for their rights and fought against police brutality, poverty, oppression, and discrimination in the Tenderloin. We, the transgender, gay, lesbian, and bisexual community, are dedicating this plaque to these heroes of our civil rights movement.”

This week, the United States Navy named a ship the USNS Harvey Milk, after the martyred San Francisco activist who, 11 years after that Compton’s Cafeteria incident, became the first openly gay person to win elected office in California, as a member of the city’s board of supervisors. Milk’s camera shop, now the Human Rights Campaign Action Center, is a brisk 45-minute walk—or march!—from the corner of Taylor and Turk.