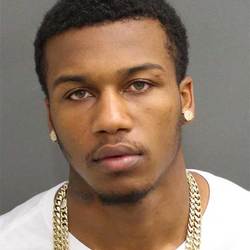 A wanted man was killed Tuesday after authorities said he shot a sheriff’s deputy in Florida, the Orange County Sheriff's Office said.

A source told WFTV that the deputy, who was not identified, was shot in the arm and the leg and is expected to recover. The deputy was taken to Orlando Regional Medical Center for treatment.

The suspect was known to deputies and was being picked up on a warrant for several robberies, sources told the news station.

Gunfire was reported just before noon in the 8500 block of South Texas Avenue near Americana Boulevard.

No other details were released about what led to the shooting.

Dozens of law enforcement officers from multiple law enforcement agencies remained at the scene, at the Huntington-On-The Green Condominiums, after the shooting. Crime scene tape surrounded a building and several vehicles.

Deputies appeared to be focusing on a silver car that had all four doors open. Officers also gathered in a nearby shopping plaza.

A witness told WFTV that she heard about eight gunshots.

Interstate 4 west was briefly shut down to make way for emergency vehicles.

The Florida Department of Law Enforcement is investigating, which is standard practice for officer-involved shootings.