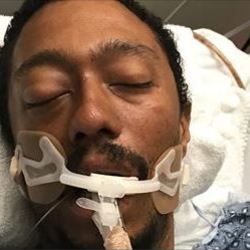 35-year-old Christopher Eisinger was a homeless man who died after he struggled with Anaheim police has died, and his family and their attorney plan a news conference to allege police brutality. A use-of-force investigation was under way in Anaheim, after police admitted using physical force to restrain Christopher Eisinger. But the police spokesman insisted he was not beaten, choked, struck or Tasered.

Eisinger was taken off life support at 10:43 a.m. Saturday, after it was determined he was brain dead because of this incident, the family's lawyers, Anne Della Donna and Eric Dubin said in a statement.

"His family is heartbroken to announce that Chris has now died," his lawyers reported.

Eisinger was first arrested the night of March 2, for allegedly trying to break into a home and several vehicles.

Officers who responded to the 1300 block of South East Gates Street Friday night spotted the suspect in a backyard and chased him to the 3000 block of West Ball Road, police said.

According to police, Eisinger violently resisted by kicking and ripping his arms away. Officers used "control holds and physical force" to restrain him.

"The officers used control holds, they used physical force during this contact to overcome his resistance and take him into custody for the suspected crimes," Anaheim Acting Police Chief Julian Harvey said last week.

However, once Eisinger was handcuffed, he stopped breathing and went into full cardiac arrest, police said.

In December 2018, prosecutors announced that they would not prosecute the officers in this case. The DA's report says police didn't kick, beat or use a Taser on Eisinger, who had no sign of serious injury. It also says paramedics were called quickly.