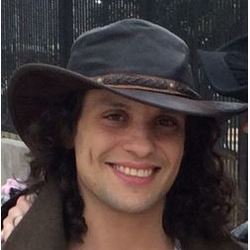 30-year-old Christopher Carroll, identified by family members as a veteran, had initially called a veterans' crisis hotline for assistance, the family said. The man told the crisis hotline that he had cut himself and was armed with a gun. Houston police confirmed the department received the routed 911 call from a U.S. Department of Veteran's Affairs Crisis hotline.

After receiving the 911 call, investigators responded to the man's home on Eagle Creek Drive around 12:45 a.m. Saturday.

When they arrived, they located a family member attempting to calm Carroll down, said Matt Slinkard, an assistant executive chief with the special operations command with the Houston Police Department. Family members of Carroll told police he suffered from post-traumatic stress disorder and was currently experiencing a crisis.

Investigators said Carroll was found hiding in some bushes in the backyard of the home, naked and armed with a handgun. Police said officers demanded that he drop his weapon and surrender but he refused. Police said Carroll reportedly pointed the gun in the direction of officers, resulting in one officer firing his weapon, striking Carroll.