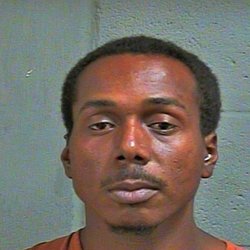 About 12:50 a.m., a clerk at the store called and said his brother was going there to shoot up the store. Officers arrived and found an irate man holding a gun, police said.

When officers arrived, Stone was causing a disturbance and ran from the officers, police Capt. Bo Mathews said. Stone pointed the gun at officers and Patten fired at Stone. Stone was struck by gunfire and was pronounced dead at the scene at 12:53 a.m.

On Tuesday, Stone was arrested just before midnight at NW 63 and Meridian Avenue. Officers responding to the report of an unmanned car rolling down the street with a person chasing after it. Officers found Stone naked except for his socks, with his clothes piled on the sidewalk. Police found a small glass vial containing what was thought to be PCP in his clothes, according to a police report.

The next night, Stone was again found naked, this time at 4517 S Woodward Ave. He became violent when handcuffed and was thought to be high on PCP again, according to another police report.