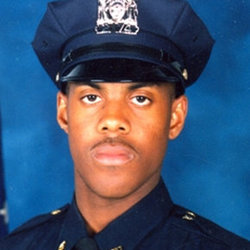 “I saw police come from the courthouse,” he said. “They said, ‘Drop your weapon.’ ”

He said that instead of dropping the weapon, the person with the gun turned around, prompting the county officers to shoot.

Officer Ridley was hit twice in the chest. He was taken to a local hospital, where he was pronounced dead.

It was unclear whether the county officers realized that the man being fired at was a police officer.