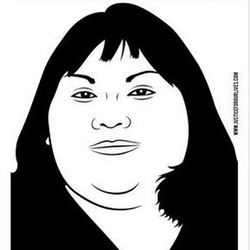 In Lawton, Oklahoma, Christina Tahhahwah lived with bi-polar disorder. When she stopped taking her medicines, her family called the police and asked them to take her to the hospital for medical care. She was at her grandparents’ house. When she refused to leave the property, the police arrested her for trespassing and took her off to jail. Not to the hospital, to jail. That was November 13, 2014.

On November 14, minutes after being handcuffed to the cell door, Christina Tahhahwah was “found” unresponsive. She was in cardiac arrest. She was transferred to the hospital, where she died. Her family was not notified of her heart attack nor of her transfer to the hospital. One family member says they only found out because a family friend, who works at the hospital, sent them a note via Facebook. The family went to the hospital and there heard that fellow jail inmates were saying that Christina Tahhahwah had been tasered for refusing to stop singing Comanche hymns. The Lawton police say no Tasers were used.

Tasers are not the issue. The issue is that Christina Tahhahwah is dead. Just another bipolar Native American woman “found” in jail. The Lawton Police have not said they treated or cared about the reports of her bipolar condition. The issue is justice.

October 2014 Meeting with the Governor's office about Police brutality