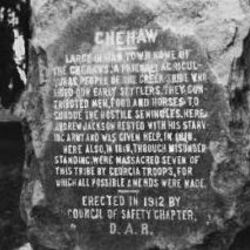 FINDING OUT  On April 23, 1818, Captain Obed Wright of the Georgia militia ordered an attack on a Chehaw Indian village, which resulted in the slaughter of several American Indians.

In a letter written a week after the attack, Brigadier General Thomas Glascock reported the attack to his superior officer, General Andrew Jackson. Glascock’s account of the Chehaw affair is important not only for its description of how 230 militiamen killed “seven men . . . one woman and two Children” but also for how it shaped Jackson’s response to the massacre.

AMERICAN ALLIES  The event shocked and angered Jackson because the Chehaw, part of the larger nation of Creek Indians, were then American allies in the First Seminole War. Just a month before Wright’s attack, General Jackson’s weary soldiers had stayed in the Chehaw village while traveling from Tennessee to Florida. The local chief, known as “Major Howard” among the whites, fed and housed the men.   After this stay, many Chehaw warriors joined Jackson’s troops to help pursue the Seminoles.

Brigadier General Glascock was in fact seeking to stay with the Chehaw again when he learned of the massacre by Wright’s men: “I sent on Brig Robinson . . . to [pro]cure Beef[.] on his arriving there, the Indians had fled in every direction[,] the Chehaw Town having consumed about four days before by a party of men . . . under a Capt Wright.”

MISTAKEN IDENTITY  As Glascock explained, Wright had learned of a skirmish between white settlers and two Creek tribes—the Hopaunees and the Philemmees—and “immediately sent or went to the Governor and obtained orders” to destroy their towns. Instead of attacking the guilty Hopaunees and Philemmees, however, Wright’s men attacked a Chehaw village that was not responsible for the reported violence against the settlers.

THE MASSACRE  There is no definitive account of the massacre, but historians agree that Wright burned the village and, as Glascock recounted in his letter to Jackson, viciously murdered innocent men, women, and children.

Glascock narrated Wright’s terrible misjudgments in obtaining and following his orders from the governor. After capturing a young Chehaw, Wright did not oblige his request to “bring any of the Chiefs for the Capt to talk with.” Instead, Wright “ordered the Cavalry rushed forward and commenced the massacre . . . came out from his House with a white flag in front of the line. it was not respected . . . he fell and was Bayoneted.”

JACKSON'S RESPONSE  Jackson viewed the incident as shamefully disloyal and extremely dangerous, with the potential to turn the friendly Chehaws, who Glascock described as “at a loss to know the cause of this displeasure of the white People,” into enemies. Soon after he received Glascock’s account of the massacre, Jackson wrote to the William Rabun, the governor of Georgia, calling Wright a “cowardly monster in human shape” and demanding that “Capt. Wright must be prosecuted and punished for this outrageous murder.” Secretary of State John Quincy Adams followed up with another letter to Governor Rabun, telling him that “The President of the United States has directed that Captain Obed Wright should be prosecuted for the murder of friendly Indians.”

Wright was eventually arrested by one of Jackson’s men but broke parole and escaped to Spanish Florida before he could be tried. Wright was never heard from again, and no one was ever held responsible for the massacre of the Chehaws.