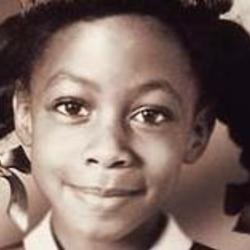 Murder Victim. Born Carol Denise McNair, the eldest child of Chris and Maxine McNair a photo shop owner and a school teacher. She attended Center Street Elementary School where her she counted Condoleeza Rice among her school friends. She was a member of the Brownies and played baseball, and had a well developed social conscious, helping to raise money for charity by staging plays, dance routines, and poetry readings in the family carport. She was a member of the Sixteenth Street Baptist Church in Birmingham which was, due to the spacious basement auditorium, the center for meetings of the civil rights movement. On Sunday morning, September 15, 1963, several members of the KKK tunneled under the church and planted 122 sticks of dynamite near what was the girls' basement rest room. At about 10:22 AM, twenty-six children were entering the basement assembly room for closing prayers, five girls were apparently changing into their choir robes. At 10:19 AM the bomb exploded, blowing a hole in the east side of the church, shattered windows, walls, and doors and injuring or killing 24 people. When the debris was searched for survivors, the bodies of the four young girls were found; Cynthia Wesley, Addie Mae Collins, Denise McNair, and Carole Robertson. The murders touched off nationwide outrage. Addie Mae Collins, Denise McNair, and Cynthia Wesley were interred during joint funeral attended by over 8,000 mourners. Despite the outrage and an FBI investigation, however, no one was charged with the crime. It wasn't until 1977 that anyone was charged, at which time a Klan leader was convicted for the murders. Another two suspects were charged and convicted in 2001 and 2002, a fourth suspect died before charges were brought. The song "Birmingham Sunday," recorded by Joan Baez memorialized the victims of the bombing. In 1997 a documentary film on the bombing called "4 Little Girls" was released.
(bio by: Iola)

In June 2016, Dianne Braddock, Robertson's older sister, received a telephone call from the Alabama Board of Pardons and Paroles saying that Thomas Blanton, who had served 15 years of his four life sentences at the St. Clair Correctional Facility, would come before them on August 3, 2016 for his first parole hearing. All of the families of the four little girls killed in this incident were notified of the hearing.