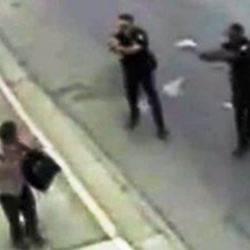 Two officers responded within minutes, and found a Hispanic man on the street with large gardening shears.

Officers told Central Coast News they told the man to drop the shears in both English and Spanish and that he refused to comply and began waving them around. They say officers attempted to use a stun gun but it was not effective.

The suspect's name and age have not been released at this time.

Witnesses captured the incident on cellphone footage that quickly went viral  Tuesday as people shared the clip on various social media sites. A version of that video can be seen below:

Burris filed a claim against the city of Salinas on Tuesday, alleging wrongful death, negligence, assault, battery and civil rights violations. No amount of damages has been specified yet, but Jose Roberto and other survivors, including an 8-year-old daughter, are seeking at least $25,000.

Burris intends to file a federal civil rights lawsuit. "The decedent is the third Latino male to be shot and killed by city of Salinas police officers since March under questionable circumstances," according to the claim.

The claim goes on to state that Mejia's body was left on the sidewalk for hours after the fatal shooting: "Claimant believes this was done to intimidate the surrounding Latino community."

May 2014 Police explanation of 4 Latino killings by police

"The number of deadly force shootings in this time period is alarming and has caused social upheaval, dissension and fear in the community," Burris said.

Burris said residents are concerned that police have adapted a practice of "shoot first and justify their conduct later" with responses such as: he reached to his waist, he lunged at me, he attacked me and others.

A federal appeals court found that a civil lawsuit against the city of Salinas and two Salinas police officers who shot and killed a 44-year-old Latino man in 2014 can move forward, according to an unpublished memorandum filed Feb. 4, 2019.

May 2014 Protests by local community