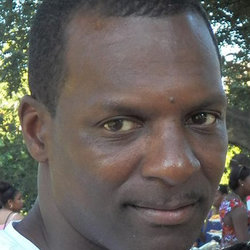 Police in New York shot and killed a man inside a synagogue after he reportedly asked for a Bible, stabbed a man and then lunged at police.

Peters first entered the synagogue just after 5 p.m. before leaving, police said. He returned at midnight but was escorted out. When Peters came back, he had a 9-inch knife with a 41/2-inch blade, police said.

He stabbed the student on the left side of the head and neck after blurting out "I am going to kill you," according to witnesses and investigators.

Someone then alerted Police Officer Timothy Donohue, 25, stationed at a command post outside the building.

He called for backup and went inside, Bratton said. Two additional officers in a 71st Precinct sector car -- Roberto Pagan, 29, and Kevin Haniff, 29 -- rushed to the location and all three faced down the knife-wielding Peters, Bratton said. Video footage shows Peters brandishing the knife and moving around the room as officers repeatedly order him to drop it.

At one point, Peters obeys their commands and places the knife on a table, a move that prompts Pagan to holster his gun and approach with handcuffs. But Peters picks up the knife and appears to lunge toward the officer. Pagan then opened fire, Bratton said.