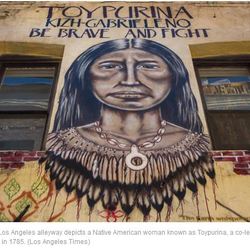 Between 1846 and 1870, California’s Indian population plunged from perhaps 150,000 to 30,000. Diseases, dislocation and starvation caused many of these deaths, but the near-annihilation of the California Indians was not the unavoidable result of two civilizations coming into contact for the first time. It was genocide, sanctioned and facilitated by California officials.

Neither the U.S. government nor the state of California has acknowledged that the California Indian catastrophe fits the two-part legal definition of genocide set forth by the United Nations Genocide Convention in 1948. According to the convention, perpetrators must first demonstrate their “intent to destroy, in whole or in part, a national, ethnic, racial or religious group, as such.” Second, they must commit one of the five genocidal acts listed in the convention: “Killing members of the group; causing serious bodily or mental harm to members of the group; deliberately inflicting on the group conditions of life calculated to bring about its physical destruction in whole or in part; imposing measures intended to prevent births within the group; forcibly transferring children of the group to another group.”

California’s Legislature first convened in 1850, and one of its initial orders of business was banning all Indians from voting, barring those with “one-half of Indian blood” or more from giving evidence for or against whites in criminal cases, and denying Indians the right to serve as jurors. California legislators later banned Indians from serving as attorneys. In combination, these laws largely shut Indians out of participation in and protection by the state legal system. This amounted to a virtual grant of impunity to those who attacked them.

That same year, state legislators endorsed unfree Indian labor by legalizing white custody of Indian minors and Indian prisoner leasing. In 1860, they extended the 1850 act to legalize “indenture” of “any Indian.” These laws triggered a boom in violent kidnappings while separating men and women during peak reproductive years, both of which accelerated the decline of the California Indian population. Some Indians were treated as disposable laborers. One lawyer recalled: “Los Angeles had its slave mart [and] thousands of honest, useful people were absolutely destroyed in this way.” Between 1850 and 1870, L.A.’s Indian population fell from 3,693 to 219.

It is not an exaggeration to say that California legislators also established a state-sponsored killing machine. California governors called out or authorized no fewer than 24 state militia expeditions between 1850 and 1861, which killed at least 1,340 California Indians. State legislators also passed three bills in the 1850s that raised up to $1.51 million to fund these operations — a great deal of money at the time — for past and future anti-Indian militia operations. By demonstrating that the state would not punish Indian killers, but instead reward them, militia expeditions helped inspire vigilantes to kill at least 6,460 California Indians between 1846 and 1873.

The U.S. Army and their auxiliaries also killed at least 1,680 California Indians between 1846 and 1873. Meanwhile, in 1852, state politicians and U.S. senators stopped the establishment of permanent federal reservations in California, thus denying California Indians land while exposing them to danger.

State endorsement of genocide was only thinly veiled. In 1851, California Gov. Peter Burnett declared that “a war of extermination will continue to be waged ... until the Indian race becomes extinct.” In 1852, U.S. Sen. John Weller — who became California’s governor in 1858 — went further. He told his colleagues in the Senate that California Indians “will be exterminated before the onward march of the white man,” arguing that “the interest of the white man demands their extinction.”

Beyond premeditated, systematic killings of California Indians, other acts of genocide proliferated too. Many rapes and beatings occurred, and these meet the U.N. Genocide Convention’s definition of “causing serious bodily harm” to victims on the basis of their group identity and with the intent to destroy the group. The sustained military and civilian policy of demolishing California Indian villages and their food stores while driving Indians into inhospitable mountain regions amounted to “deliberately inflicting on the group conditions of life calculated to bring about its physical destruction in whole or in part.” Because malnutrition and exposure predictably lowered the birthrate, some state and federal decision-makers also appear guilty of “imposing measures intended to prevent births within the group.”

Finally, the state of California, slave raiders and federal officials were all involved in “forcibly transferring children of the group to another group.” Thousands of California Indian children suffered such forced transfers. By breaking up families and communities, forced removals constituted “imposing measures intended to prevent births within the group.” In effect, the state legalized abduction and enslavement of Indian minors; slavers exploited indenture laws and federal officials prevented U.S. Army intervention to protect the victims.The issue of genocide in California poses explosive political, economic and educational questions for the state, California’s tribes and individual California Indians. It is up to them — not academics like me — to determine the best way forward.

Will state officials tender public apologies, as Presidents Ronald Reagan and George H.W. Bush did in the 1980s for the relocation and internment of some 120,000 Japanese Americans during World War II? Should state officials offer compensation, along the lines of the more than $1.6 billion Congress paid to 82,210 of these Japanese Americans and their heirs? Might California officials decrease or altogether eliminate their cut of California Indians’ annual gaming revenues ($7.3 billion in 2014) as a way of paying reparations? Should the state return control to California Indian communities of state lands where genocidal events took place? Should the state stop commemorating the supporters and perpetrators of this genocide, including Burnett, Kit Carson and John C. Frémont? Will the genocide against California Indians join the Armenian genocide and the Holocaust in public school curricula and public discourse?

These are crucial questions. What’s beyond doubt is that the state and the federal government should acknowledge the genocide that took place in California.

Decency demands that even long after the deaths of the victims, we preserve the truth of what befell them, so that their memory can be honored and the repetition of similar crimes deterred. Justice demands that even long after the perpetrators have vanished, we document the crimes that they and their advocates have too often concealed or denied. Finally, historical veracity demands that we acknowledge this state-sponsored catastrophe in all its varied aspects and causes, in order to better understand formative events in both California Indian and California state history.