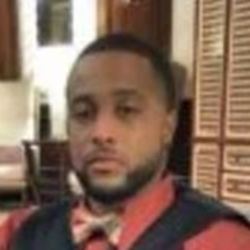 Police are investigating a shooting involving an officer in Newport News on April 29.

Officials say it happened at the Pondo Cafe and Lounge in the 5800 block of Jefferson Avenue just before 5 a.m..

Police dispatch first received a call of a "violent subject" inside the restaurant. As officers responded, the call was upgraded to an armed subject.

When police arrived on scene, they heard multiple gunshots from inside the restaurant.

Emergency Communications Dispatchers made contact with a someone inside the business, and determined that there were three people behind held hostage by the armed man, later identified as 35-year-old Caleb "CJ" Jackson Jr.

The doors to the building were locked -- preventing police from getting inside -- so a tactical situation was called at 5:06 a.m.

When the tactical team made entry inside the business, Jackson allegedly raised his gun and pointed it at one of the responding officers. An officer shot Jackson, who was then pronounced dead on the scene.

A second person, who had made the original call to police, was found inside the restaurant. That person indicated he had been shot prior to the tactical team responding.  He was taken to the hospital, where he is listed to be in stable condition.

Police say as part of standard protocol, the name of the officer involved in the shooting will not be released until an investigation has been completed and the Commonwealth's Attorney's Office makes a final ruling.

The officer is described as a 22-year veteran of the Newport News Police Department, who has served on the Tactical Operations Unit for 20 years.

Police say the officer has been involved in one fatal shooting which occurred during a tactical situation and was deemed justified by the Newport News Commonwealth's Attorney's Office.

The officer is now on paid administrative leave.

We deeply regret that it was necessary to use lethal force in this incident and we extend our deepest sympathies to the family of Caleb Jackson, Jr.  It is never an easy decision for any police officer to make.  We pledge a thorough and objective investigation that will be submitted to the Commonwealth’s Attorney's Office for final review.

This incident began with the serious wounding by gunshot of an employee at the business, who provided ongoing statements to the Department via telephone.  There were strong indications that this wounded victim was going into medical distress, and further delays in linking him to emergency medical treatment could have cost him his life.  By all indications, the Newport News Police personnel from dispatch to patrol to our Tactical response team acted with professionalism, courage, and putting their safety at risk to save a life.  While we must await the outcome of the investigation, the preliminary information we have gives me pride in the work of these men and women.

The Pondo Cafe and Lounge was the scene of another shooting late last year.