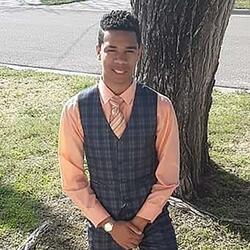 On Septmber 24, 2021 in Mission, Kansas, 17-year-old Cedric “C.J.” Lofton was killed a day before his 18th birthday. He was suffering from a mental health crisis. He was promised by police officers that he would be taken from his home to a mental health facility but he was sure he’d be taken to jail. He was also sure he’d be killed. Despite his delirium, he was essentially right on both counts.

KBI and the sheriff’s office said police received a mental health call to Lofton’s foster dad’s house early in the morning on Sept. 24, and the 17-year-old was taken to JICA for evaluation using a restraint device. Once in JICA’s custody, KBI says the restraint was removed.

While taking Lofton to a holding cell, KBI says he assaulted a staff member leading to a struggle. After Lofton was put in the holding area, staff noticed he was unresponsive and was taken to the hospital, where he died a few days later.