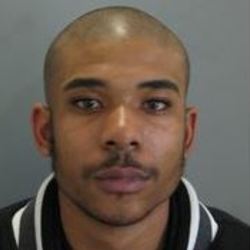 Twenty-one hours after barricading himself inside his family's Middletown-area home, the 26-year-old man who had earlier killed a Delaware state trooper emerged Thursday morning carrying a weapon when police used an armored vehicle to rip siding off the structure.

Burgon Sealy Jr., who had rained gunfire on hundreds of officers during the standoff, was gunned down at 9:17 a.m. on his front lawn by the officers surrounding his home in the Brick Mill Farm development, said Delaware State Police Col. Nathaniel McQueen Jr.

A yellow sheet lay over Sealy's body on the manicured lawn, littered with shards of siding. Behind him, the white single-family home with green shutters sat in tatters – pink insulation clinging to wallboard and windows blasted out by explosive devices police used in hopes of convincing Sealy to surrender.

Hundreds of officers armed with assault rifles and bullet-proof vests remained at the scene Thursday, with police vehicles lining nearly every roadway leading to the home. Officers from the FBI, New Castle County and Wilmington police joined Delaware state troopers at the barricade. Helicopters took off and landed from a large green circular park in the middle of the development, picking up officers and dropping others off.

The case drew national attention Wednesday and Thursday after Cpl. Stephen J. Ballard, an 8½-year veteran with Delaware State Police, was gunned down in a Bear-area Wawa parking lot 15 miles from the barricaded home.

McQueen tearfully explained how Sealy got out of an acquaintance's vehicle in the parking lot and began shooting Ballard during a "suspicious vehicle" check just after noon Wednesday along Pulaski Highway.

Ballard turned to run for cover, but Sealy continued to shoot him, McQueen said. When the trooper fell to the ground, Sealy repeatedly shot him at close range.

Ballard, who was on duty and in full uniform, later died from his injuries at Christiana Hospital, McQueen said.

"The acts of Stephen yesterday exemplified the dedication that he brought to the citizens of Delaware on a daily basis," McQueen said, his voice thick with emotion.

McQueen declined to comment on whether 32-year-old Ballard was targeted. He would not speak to Sealy's motive, citing the ongoing investigation.

McQueen said Sealy contacted family members after the shooting Wednesday and told them he had shot a trooper at the Wawa. His family then contacted police.

A second man, in the driver's seat of the vehicle when Sealy began shooting at the Wawa, was taken into custody at the convenience store, McQueen said. He has been released and is not considered a suspect in the investigation.

Sealy jumped into his own vehicle at the Wawa and streaked to the family home near Middletown. Sealy was "well-armed and heavily equipped," McQueen said, though he would not comment on the type of weapons the man had in the home.

The Brick Mill Farm development was evacuated Wednesday when Sealy sought refuge there. The neighborhood was slowly opened up beginning at 11 a.m. Thursday. Investigators remained at the home, where four armored vehicles sat on the lawn and on the street.