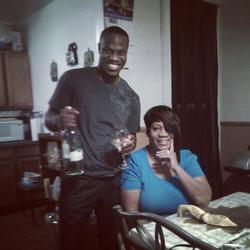 Tate-Brown was pulled over at about 2:45 a.m. on Dec. 14, 2014, because officers said his car didn't have headlights on. Police originally said Tate-Brown, 26, was reaching into his rental car for a loaded pistol. Six months later, they conceded he was running around the back of the car when Officer Nicholas Carrelli, believing Tate-Brown was going to the car for a gun, shot him in the back of the head. Police Commissioner Charles Ramsey blames the original false narrative on a rush to provide the public details.

Tate-Brown's mother, Tanya Brown-Dickerson, has filed a civil rights lawsuit against the city. She contends her son was running away from a police beating when he was shot.

On Monday, April 24, 2016, the civil rights claims against the two Philadelphia police officers involved in the case were cleared to proceed.

In a 20-page ruling, U.S. District Judge Stewart Dalzell denied a request from Tate-Brown's mother to turn her case into a class-action lawsuit - a move that would have opened the door for others who say they were subjected to excessive police force join in the civil action.

On Wednesday, August 5, 2015, the NAACP, the Philadelphia Black Clergy and other groups gathered at the 6700 block of Frankford Avenue - where Tate-Brown was shot. They called for the removal of police officers - and an independent investigation by the department of justice and the attorney general. On August 10, Brown supporter protested outside the prosecutor's office near city hall.