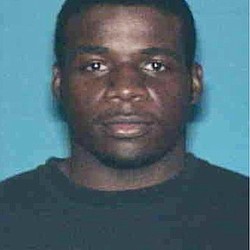 Brandon Lamar Johnson, a 28-year-old DeKalb County resident, was shot to death by West Virginia State Police on Tuesday September 29, 2015, according to the Rockdale Sheriff’s Office. Johnson exited his vehicle after being pursued by West Virginia police and pointed a gun at troopers. Investigators believe Johnson shot his former co-worker outside a Rockdale County Goodwill store, then drove nearly 500 miles away to West Virginia, where he was killed by police.