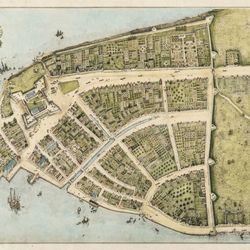 Much is being made of the Bowling Green Massacre in Kentucky that never happened but was nonetheless highlighted by Presidential Counselor Kellyanne Conway. Twitter memes are bursting forth. A fund to benefit the victims of the “Bowling Green Massacre” has been set up—that links to the American Civil Liberties Union (ACLU) website. There’s even a Facebook Bowling Green Massacre Survivor Check-in page, with a map showing the little patch of land at the southern tip of Manhattan known as Bowling Green.

Yet a massacre actually did take place at the tip of Manhattan, though not by the nefarious “Muslim terrorists” whom Conway would have us fear. The real Bowling Green Massacre occurred in 1643 during what was known as Kieft’s War, and was perpetrated by white Christians. The Governor of New Netherlands Willem Kieft, sent European soldiers to move against two camps of refugee Natives, overriding the direction of his ruling council and the general sentiments of the colonists. The soldiers fell upon members of the Lenape Tribe with deeds that would long presage the notion of ISIS.

“Infants were torn from their mother’s breast and hacked to death in the presence of their parents, and the pieces thrown into the fire and in the water,” wrote a Dutch witness, David Pietersz de Vries, to the massacre on February 25, 1643. “Other sucklings, being bound to small boards, were cut, stuck and pierced, and miserably massacred in a manner to move a heart of stone. Some were thrown into the river, and when the fathers and mothers endeavored to save them the soldiers would not let them come on land but made both parents and children drown.”

Approximately 80 defenseless Lenape were slaughtered in the Pavonia Massacre near what is now known as Pavonia, New Jersey on the other side of the Hudson River, and 30 more in the encampment at Corlaer’s Hook on Manhattan Island.

RELATED: A Dutch Massacre of Our Lenape Ancestors on Manhattan

Certain of their moral supremacy, the soldiers were proud of themselves and believed that they had done good Christian deeds, according to the documentary The Doctrine of Discovery: Unmasking the Domination Code, co-produced by ICMN contributor and legal scholar Steven Newcomb (Shawnee, Lenape) and directed by Sheldon Wolfchild (Dakota). They were, after all, in accordance with the Catholic Church’s Doctrine of Discovery, a series of papal bulls issued in the 1400s that gave Christians the right to control “uninhabited” lands—defined as lands not peopled by Christians. The film, based on Newcomb’s 2008 book Pagans in the Promised Land: Decoding the Doctrine of Christian Discovery (Fulcrum Publishing), recounts that massacre and others like it in its analysis of how these ancient decrees from the Vatican still infuse treatment of American Indians today.

The papal bulls, says Newcomb in the voiceover to the film, “declared war on the non-Christian world and instructed Christians to invade, capture, vanquish and subdue all Saracens, pagans and other enemies of Christ, to reduce them to perpetual slavery, and to take away all their possessions and property.”

Today Bowling Green is the site of the New York branch of the National Museum of the American Indian.

The National Museum of the American Indian–New York, the George Gustav Heye Center, is located within the historic Alexander Hamilton U.S. Custom House. The museum’s permanent and temporary exhibitions—as well as a range of public programs, including music and dance performances, films, and symposia—explore the diversity of the Native people of the Americas.

Open 10 AM–5 PM daily, Thursdays to 8 PM. Open 10 AM–5 PM on Thanksgiving; closed on December 25. Admission is free. Floor plans are available for download and printing.

The National Museum of the American Indian–New York, is located on the south side of Bowling Green, in lower Manhattan, adjacent to the northeast corner of Battery Park.

See the NY MTA for maps and service updates for subways and buses.

Drop-off & Parking
Buses may drop off groups at State Street or Whitehall Street. There is no parking at the museum. There are several parking garages located nearby. Click here for current parking options.

Visitor Services desks on the Second Floor in the Great Hall provide information on daily tours, programs, and screenings. Public tours for families and adult groups are given daily, please consult the calendar when planning your visit.

Check the Smithsonian website for the latest on security procedures at Smithsonian museums.