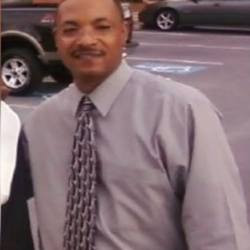 Bobby Daniels was shot and killed by Douglas County police responding to a call from a security guard who said he had been kidnapped. According to Sheriff Phil Miller, when Douglas County deputies arrived, they encountered three male suspects, one of which had a gun. One of the deputies took the gun, Miller said, and placed it on the hood of a car. According to police, one of the suspects, 48 year-old Daniels, then grabbed the gun and pointed it at deputies. Another deputy shot and killed Daniels with an AR-15. According to media reports, the family of Daniels said he worked as a security guard and he would never point a weapon in the direction of a deputy. One of the family members who witnessed the shooting says they never saw Daniels pick up a weapon.

Bobby Daniels was a peace officer by trade – a private security guard employed at CNN’s headquarters in Atlanta. When he learned that his emotionally troubled 25-year-old son Bias had suffered a breakdown and was holding a fellow security guard at gunpoint in a mobile home part in Douglasville, Bobby raced to the scene. Using the skills of persuasion and patient de-escalation upon which a private peace officer must rely, Bobby persuaded his son to relinquish his handgun and place it on the hood of a car.

Just seconds later, Daniels was fatally shot – not by his mentally ill son, but by the sheriff’s deputies who had arrived on the scene.

In familiar fashion, law enforcement officials insist that the victim of this police shooting – at least the 960th to occur in 2015 – was to blame, and they have provided contradictory accounts as to how it happened.

“I think that he could have been trying to help the situation instead of hurting it, but when he pointed the gun at the officers, he was shot,” asserted Douglas County Sheriff Phil Miller in remarks to reports at the scene shortly after the December 21 incident.