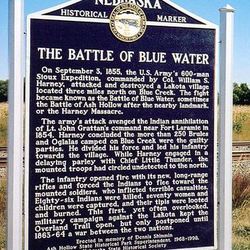 The band responsible for the battle with Grattan arrived at Blue Water in August of 1855. Now led by Chief Little Thunder, these Indians were not expecting war with the whites and did not set up a defensive camp. Some other Sioux and Cheyenne were also with them. About 250 men, women and children total were in the village.

General Harney, stationed at Fort Leavenworth in Kansas, originally wanted 1200 men for his campaign, but eventually settled with 600. He planned to go all the way to the Black Hills and fight the Indians wherever they were. On September 2, Harney and his men crossed the South Platte and entered Ash Hollow. From there they could see the Sioux village at Blue Water. Early the next morning, Harney and about 500 of his 600 men advanced against the Sioux. A detachment of cavalry went to the rear of the village to stage an ambush. Some Indians carrying a white flag came out of the village seeking peace, but the army advanced. The village began to retreat, so Harney called Little Thunder and told him that his band had to pay for the death of Grattan. Little Thunder responded that he could not control the actions of the young people in his tribe, but they wanted peace. Harney insisted on a fight and let Little Thunder go. After the discussions, the army opened fire and chased the villagers into the cavalry waiting at the other end of the village. About 86 Indians, including women and children, were killed and another 70 were captured. The village itself was destroyed. Only 12 soldiers were killed.

Lieutenant G.K. Warren kept a journal of the battle. After the fighting was over, he was sent to recover injured Indians. He described the scene as such:

The sight on top of the hill was heart-rendering, wounded women and children crying and moaning, horribly mangled by bullets… I found another girl about 12 years old laying with her head down in a ravine, and apparently dead. Observing her breath, I had a man take her in his arms. She was shot through both feet.

Another soldier described “a little child naked, save for a scarf around its waist in which a little puppy was wrapped.”