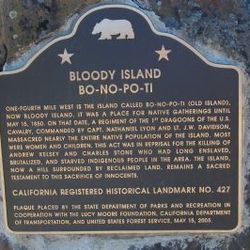 On May 15, 1850, a 1st Dragoons Regiment of the United States Cavalry contingent under Nathaniel Lyon, then still a lieutenant, and Lieutenant J. W. Davison tried to locate Augustine's band to punish them. When they instead came upon a group of Pomo on Badon-napoti (later called Bloody Island), they killed old men, women and children. The National Park Service has estimated the army killed 60 of 400 Pomo; other accounts say 100 were killed. Most of the younger men were off in the mountains to the north, hunting. Some of the dead were relatives of Habematolel Pomo of Upper Lake and Robinson Rancheria of Pomo Indians of California. The army killed 75 more Indians along the Russian River.

One of the Pomo survivors of the massacre was a 6-year-old girl named Ni'ka, or Lucy Moore. She hid underwater and breathed through a tule reed. Her descendants formed the Lucy Moore Foundation to work for better relations between the Pomo and other residents of California.