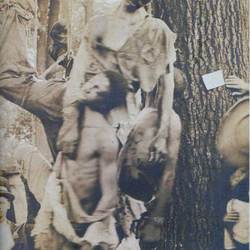 Lynchings in which mobs raided jailhouses to hang, torture and burn alive black men, sometimes leading to public executions in courthouse squares, occurred more often in the U.S. South than was previously known, according to a report released on Tuesday.

The slightest transgression could spur violence, the Equal Justice Initiative found, as it documented 3,959 victims of lynching in a dozen Southern states.

The group said it found 700 more lynchings of black people in the region than had been previously reported. The research took five years and covered 1877 to 1950, the period from the end of post-Civil War Reconstruction to the years immediately following World War Two.

The report cited a 1940 incident in which Jesse Thornton was lynched in Alabama for not saying “Mister” as he talked to a white police officer.

In 1916, men lynched Jeff Brown for accidentally bumping into a white girl as he ran to catch a train, the report said.

Bryan Stevenson, founder and director of the Montgomery, Alabama-based EJI, said that while current events did not directly equate with lynching, “what happened then has its echoes in today’s headlines.”

He cited racial differences in reactions to last year’s shooting death of an unarmed black teenager in Ferguson, Missouri, by a white police officer.

The group said the report was aimed at spurring Americans to face the lasting impact of their history. It also would like to see historical markers placed across the South to note sites where lynchings occurred.

“The South is littered with monuments for the Civil War,” Stevenson said. “But we haven’t looked at the great evil of slavery. Its aftermath morphed into terrorism of lynching.”

“We as Americans haven’t dealt with our full history,” he added.

Sociology professor E.M. Beck of the University of Georgia agreed that past lynchings had affected perceptions of justice.

“Many white people look on the police as their protectors, defenders of their rights, and blacks can look at the same officers as part of a system sent to control and contain them,” he said.

Here is a partial list of Black Lynchings since 1859.