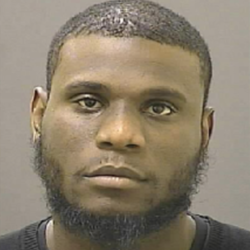 Police department spokesman T.J. Smith said at a news conference Monday evening that Billy L. Rucker of Southwest Baltimore was shot after he pointed and fired a semi-automatic handgun at an officer, and later died at a hospital. Smith said Rucker was running from officers and dropped a pistol magazine during the chase, which ended on the median of Gwynns Falls Parkway.

Police released partial video from the officer’s body-worn camera, which Smith said shows Rucker start to turn toward to the officer. A muzzle flash from Rucker’s gun can be seen in the dark, shaky footage, Smith said.

“It is our thought that he probably thought he still had ammunition on him but he didn’t, fortunately enough,” Smith said. “We are extraordinarily fortunate once again that we didn’t have an officer shot last night.”

Smith said the officer fired multiple rounds but did not know how many times he struck Rucker.