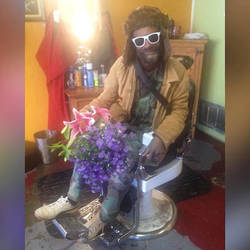 Edwards’ family members said he had been diagnosed with bipolar disorder and schizophrenia.

Police say Edwards was carrying a knife and ran towards officers before they opened fire.

Oklahoma City Police Capt. Daniel Stewart said police tried to deescalate the confrontation but had no choice except to shoot.

“They used a taser which most of our officers are equipped with,” Stewart said. “Then attempted to use OC gas which is commonly known as pepper spray and that was not effective.”

Bystander video shows part of the encounter. In the video, three officers surround Edwards. He appears to run towards one officer and police immediately fire three shots.

Edwards then veers away from the police and runs away from them. The officers fire three more shots and he falls. Edwards was pronounced dead at the scene.