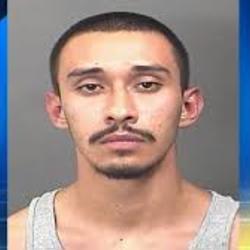 Benjamin Quezada, 21, was shot and killed by a Baytown police officer early Tuesday after officials said he pointed what appeared to be an AR-15 at the officer. The gun turned out to be a pellet rifle.

In the Baytown neighborhood where Quezada lived with his parents, neighbors reacted angrily to news of the shooting.

"He wasn't right in his mind. The elevator didn't go all the way up. They killed that dude for no reason," neighbor James Wilson said. "He'd do dumb stuff. Police come over to his house many times, find him sitting outside playing with BB guns."

Wilson said Quezada was mentally challenged and earned a living doing yard work with his father. On one occasion Wilson says police went to the family home and confiscated a pellet rifle that resembled an AR-15, but later returned it to him.

Freed was unable to find a record of that, but says another Baytown officer confiscated a pellet pistol from Quezada in December 2014, during a traffic stop. Quezada was a passenger in the car and was arrested for public intoxication.

"That ain't him, that ain't him," Cienfuegos said. "He was just trying to make an honest living, doing yards, doing whatever it takes. I can't picture him doing that."

But Freed says Quezada had a previous arrest for assault, and court records show he was sentenced to 10 days in jail after pleading guilty to evading arrest in November 2014.

The officer involved in the shooting is a 14-year veteran of the Baytown Police Department. The officer was unharmed and will be on paid administrative leave for three days.

The shooting is under investigation by the Baytown Police Department, the Harris County District Attorney's Office and the Harris County Institute of Forensic Sciences. The case is expected to be referred to a grand jury.