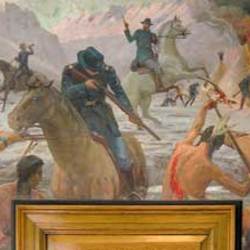 On January 29, 1863, 450 Northwestern Shoshone were killed along the Bear River, near present day Preston, Idaho, in perhaps the largest massacre in United States history.

Chief Bear Hunter’s band of Northern Shoshone spent the cold months in Utah Territory where they and other Shoshone bands gathered for winter games and the Warm Dance to urge the return of spring. Food was plentiful, the weather mild, and children played along the river, frequently digging foxholes in the banks. There was plenty of wood for fire and natural hot springs—the people were content.

The settlers began to make Utah their home in the 1840s, intruding on Shoshone land and using Shoshone resources. Small skirmishes between the tribes and settlers occurred with increasing frequency and intensity through the 1850s and into the 1860s. With the discovery of gold, violence against the Shoshone increased and the Shoshone increasingly made raids on wagons for food.

Northwestern Shoshone elder Mae Parry recorded the oral traditions of the Bear River Massacre, through the testimony of 13 survivors of the band of Chief Sagwitch. According to Parry, three events changed the course of their history. First, three Northwestern Shoshone “troublemakers” stole some horses and cattle from white settlers. Next, a conflict between miners and another Shoshone band resulted in the death of the miners. Lastly, a fight between Shoshone boys and white boys resulted in the death of two of the Shoshone boys and two white boys.

Although the Northwestern Shoshone were not responsible for all three conflicts, the settlers did not recognize the difference between one band and another. As far as they were concerned all Indians were the same and all were guilty.

The Northwestern Shoshone began to recognize that their very existence was threatened. “They were starting to feel like prisoners in their own country. Many began to feel like trapped animals who would have to fight for their lives to the end,” Parry wrote.

Just two days before the massacre, an older Northwestern Shoshone man named Tin Dup dreamt of what would take place and he urged the tribe to leave the area, which he and his family did. Soon after, a friendly white reported to them that the settlers were pushing for Army Colonel Patrick Edward Connor to remove the Northwestern Shoshone permanently.

It had been Chief Sagwitch’s hope to negotiate a peaceful settlement with the colonel, who had been assigned to Utah rather than the Civil War and was frustrated with his position. He was eager to make a name for himself and had no love for the tribes.

Early in the morning of January 29, Sagwitch saw clouds of dust rising along the riverbanks, kicked up from the hooves of the soldier’s horses. Sagwitch woke the sleeping community, the men reaching for whatever weapons they had at hand.