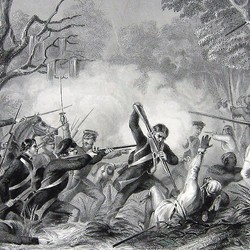 The Battle of Lake Okeechobee was one of the major battles of the Second Seminole War. It was fought between 800 troops of the 1st, 4th, and 6th Infantry Regiments and 132 Missouri Volunteers (under the command of Colonel Zachary Taylor), and between 380 and 480 Seminoles led by Billy Bowlegs, Abiaca, and Alligator on 25 December 1837. The Seminole warriors were resisting forced relocation to a reservation out west. Though both the Seminoles and Taylor’s troops emerged from the battle claiming victory, Taylor was promoted to the rank of Brigadier General as a result, and his nickname of “Old Rough and Ready” came mostly due to this battle.

In 1837 President Martin Van Buren commissioned a force which included Zachary Taylor and Richard Gentry to quell Seminole Resistance. Taylor’s army came up to a large hammock with half a mile of swamp in front of it. On the far side of the hammock was Lake Okeechobee. Here the saw grass stood five feet high. The mud and water were three feet deep. Horses would be of no use. It was plain that the Seminole meant this to be the battleground. They had cut the grass to provide an open field of fire and had notched the trees to steady their rifles. Their scouts were perched in the treetops to follow every movement of the troops coming up.

At about half past noon, the sun shining directly overhead and the air still and quiet, Taylor moved his troops squarely into the center of the swamp. His plan was to make a direct attack rather than encircle the Indians. All his men were on foot. In the first line were the 132 Missouri volunteers. As soon as they came within range, the Indians opened with heavy fire. The volunteers broke, and their commander, Colonel Richard Gentry, fatally wounded, was unable to rally them. The Indians then mounted a counterattack on the remaining soldiers. In the deadly assault some of the soldiers were scalped by the Indians. Gentry had suggested to Taylor before the battle an encirclement strategy which Taylor rejected, charging that Gentry was afraid of a direct confrontation. This could have motivated Gentry to keep charging the Seminole positions even though the original battle plan had the militia retreating at the first sign of enemy fire to re-form behind the regular army lines.

As a result of the additional casualties induced by the continued charge, the Missouri Militia fled back across the swamp, where they were too disorganized and disheartened to re-form as planned. The fighting in the saw grass was deadliest for five companies of the Sixth Infantry; every officer but one, and most of their noncoms were killed or wounded. When that part of the regiment retired a short distance to re-form, they found only four men of these companies unharmed. The 6th Infantry’s commander, Lieutenant Colonel Alexander R. Thompson, was among the dead. Lieutenant William H.T. Walker, later a general in the Confederate Army, was wounded in the neck, shoulder, chest, left arm, and also his leg during the battle.

26 U.S. soldiers, including the majority of Taylor’s officers and NCOs, were killed, with 112 wounded, against 11 Seminoles killed and 14 wounded. The battle stopped Taylor’s troops from further advance south (for the time being) and no Seminoles were captured, although Taylor did capture 100 ponies and 600 head of cattle. Years later Holata Micco (also known as Billy Bowlegs) visited Washington and on being escorted through the buildings of the Capitol and viewing many statues and paintings, he suddenly halted before a portrait of Zachary Taylor, grinned and exclaimed: “Me whip!”