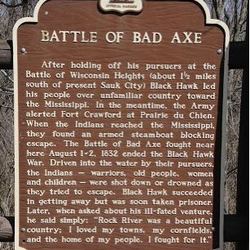 On July 22, 1832, the Band of Black Hawk rested upon a hill on the Wisconsin Heights Battlefield. One of the leaders accompanying the Black Hawk Band tried to explain to a local militia that they wanted to stop the fighting and go home. Sadly the translators for the militia had already left the scene, so the soldiers, not understanding the Ho Chunk language, promptly opened fire upon the Indians, who fled the scene.

Near the mouth of the Bad Axe River, on 1 August 1832, Black Hawk and Winnebago prophet and fellow British Band leader White Cloud advised the band against wasting time building rafts to cross the Mississippi River, because the U.S. forces were closing in, urging them instead to flee northward and seek refuge among the Ho-Chunk. However, most of the band chose to try to cross the river.

While some of the band managed to escape across the Mississippi River that afternoon, the steamboat Warrior, commanded by Captain Joseph Throckmorton, appeared on the scene and halted the band's attempt to cross to safety.

Waving a white flag, Black Hawk tried to surrender, but as had happened in the past the soldiers failed to understand and the scene deteriorated into battle. Cries of "Remember Indian Creek!", a reference to the Indian Creek massacre, were heard from the boat (though Black Hawk's band almost certainly had nothing to do with the Indian Creek Massacre). When someone on board Warrior opened fire on the unprepared Sauk, several men fell dead at Black Hawk's feet. The warriors who survived the initial volley found cover and returned fire and a two-hour firefight ensued. The Warrior eventually withdrew from battle because of lack of fuel, and returned to Fort Crawford at Prairie du Chien, Wisconsin.

At the time, newspaper reports stated that 23 Native Americans were killed, including one woman estimated to be 19 years old; she was shot through her child's upper arm as she stood holding the child watching the battle. Her child was retrieved by Lieutenant Anderson after the battle, and taken to the surgical tent, where the baby's arm was amputated. The child was then taken to Prairie du Chien, where he is believed to have recovered. The fight convinced Black Hawk that refuge lay to the north, not west across the Mississippi. In one of his last actions as commander of the British Band, Black Hawk implored his followers to flee with him, to the north. Many did not listen, and late on 1 August, Black Hawk, White Cloud and about three dozen other followers left the British Band and fled northward. Most of the remaining warriors and non-combatants remained on the eastern bank of the Mississippi. Forces on the Warrior suffered only one casualty – a retired soldier from Fort Snelling was wounded in the knee during the fight.

At 2 a.m. on 2 August, Atkinson's forces awoke and began to break camp, setting out before sunrise. They had moved only a few miles when they ran into the rear scout element of the remaining Sauk and Fox forces. The Sauk scouts attempted to lead the enemy away from the main camp and were initially successful. The combined U.S. forces fell into formation for battle: Generals Alexander and Posey formed the right wing, Henry the left wing, and Dodge and the regulars the center element. As the Native Americans retreated toward the river, the militia's left wing were left in the rear without orders.When a regiment stumbled across the main trail to the camp, the scouts could only fight in retreat and hope that they had given their comrades a chance to escape the militia, while the Sauk and Fox kept retreating to the river. However, Warrior returned after obtaining more wood in Prairie du Chien, leaving the refueling point about midnight and arriving at Bad Axe about 10 a.m. The slaughter that followed continued for the next eight hours.

Henry's men, the entire left wing, descended a bluff into the midst of several hundred Sauk and Fox warriors, and a desperate bayonet and musket battle followed. Women and children fled the fight into the river, where many drowned immediately. The battle continued for 30 minutes before Atkinson came up with Dodge's center element, cutting off escape for many of the remaining Native warriors. Some warriors managed to escape the fight to a willow island, which was being peppered with canister shot and gunfire by Warrior.

The soldiers killed everyone who tried to run for cover or cross the river; men, women and children alike were shot dead. More than 150 people were killed outright at the scene of the battle, which many combatants later termed a massacre. The soldiers then scalped most of the dead, and cut long strips of flesh from others for use as razor strops. U.S. forces captured an additional 75 Native Americans. Of the total 400–500 Sauk and Fox at Bad Axe on 2 August, most were killed at the scene, others escaped across the river. Those who escaped across the river found only temporary reprieve as many were captured and killed by Sioux warriors acting in support of the U.S. Army. Sioux brought 68 scalps and 22 prisoners to the U.S. Indian agent Joseph M. Street in the weeks following the battle. The United States suffered five killed in action and 19 wounded.

The bad Axe Massacre was a one sided battle that took place on august 1-2, it took place on the eastern bank of the Mississippi River. The majority of the Indians were killed or captured at the scene. This battle has been called a massacre by both modern and historians of that time period. Only 5 Americans were killed.

Why this is important

Because of the Bad Axe Massacre, thousands of Indians were forced north into the cold, barren desert. All others were forced upon the trail of tears, killing thousands of other Indians. This works into exploration and encounter as this event caused hundreds of thousands of Native Americans to seek out new sources of living.