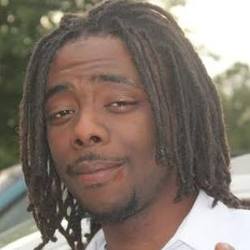 On April 28, 2016, Harris County Precinct 5 deputy constable R. Felix stopped 24-year-old Ashtian Barnes on the grounds that his rental car had a number of toll road violations.  When he approached the car, Felix said that he could smell marijuana and asked Barnes if he had any in his possession, as seen in the dash cam footage.

Barnes told the deputy he did not have a driver's license or car insurance to show him.  When Felix asked to conduct a search, Barnes complied by opening the trunk of the car.

"During the course of the conversation, (the suspect) continually reached on the floorboard and through papers as if he was reaching for something," Smith said.

The officer, realizing he would have to take the suspect in for further questioning, called for backup, Smith said. Meanwhile, the suspect kept reaching for the floorboard, so Felix asked him to step out of the car before opening the driver side door himself.

"That's when the suspect reached over, turned on the vehicle in spite of the verbal warnings of the deputy not to do so. The deputy then drew his duty weapon and gave him verbal demands again to not try to flee," Smith said. "The suspect ignored those verbal commands, began accelerating."

The deputy thought he was going to get run over so he jumped onto the side of the car.

"As he's hanging on to the car, the suspect is now starting to accelerate and reaches for the deputy's gun hand," Smith said.

When the suspect made contact with the deputy's hand, the officer fired a single shot, killing the suspect.

In August 2016, a grand jury decided not to indict R. Felix.