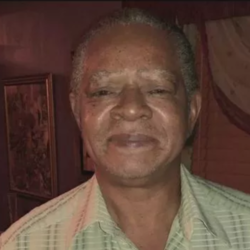 Arther McAfee Jr., 61, an Army veteran with a history of mental illness, died after a welfare check at his rural home northeast of the Longview city limits turned violent.

Maxine McAfee and her sisters had more questions than answers Saturday, hours after a Harrison County sheriff’s deputy fatally shot their brother.

McAfee’s other sister, Ollie Holman, said Saturday afternoon that she had called 911 that morning, worried about her brother.

“When I called 911, I said ‘He has a mental (disability),’ ” she said as she stood with her sisters Saturday in a mobile home next door to the roped-off residence where her brother lived on the longtime family land.

Lorine McAfee, who lives next door to her brother, said a deputy arrived about 10:30 a.m.

“I let him inside the house,” she said, describing the deadly encounter she then witnessed. “He called Arther, and Arther came out of his bedroom. But he came out swinging.”

Lorine McAfee said her brother told the deputy that he was in his house away from everyone and that he wasn’t doing anything to anyone. “The deputy went back in the hall where (McAfee) was, and he (used a stun gun on) him, and he fell to the floor.”

She said her brother did not own a gun. He kept a knife in his room, she said, but he was not carrying it when he emerged from the bedroom.

Lorine McAfee said after her brother had fallen to the floor, she held his legs while the deputy held his torso and tried to handcuff him.

“He tried to turn (McAfee) onto his belly,” she said. “The cop unsnapped his gun and shot him two times. He was on the floor.”

She said her brother was hit twice in the chest.

The family learned Saturday afternoon from another sheriff’s deputy that their brother died at a Longview medical center.