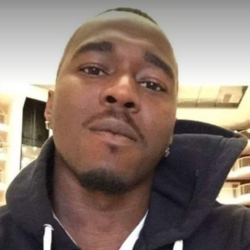 Armond Lamont Beckwith-Bell, 28, of north city was shot and killed during a struggle over a gun with a St. Louis County police officer.

Just after 5:30 p.m. Thursday (Oct. 25), two uniformed officers from the North County Precinct responded to a disturbance call at the Oak Park Apartments and Townhomes in Spanish Lake. According to police, the 911 call was a woman yelling at a man to give her her money and keys.

The officers did not have an exact apartment, but when they arrived in the area they found what appeared to be an unresponsive man inside a running SUV.

"The officer on the front right passenger looks into the vehicle and sees a handgun is very accessible to that subject," said Sgt. Shawn McGuire.

That officer opened the door and tried to secure the gun.

"That's when the suspect reacts to his movement and a fight ensues over the suspect's weapon."

McGuire said Beckwith-Bell began to drive the vehicle away while the officer was still inside the SUV.

"In fear of this life, the officer unholsters his department-issued weapon and shoots the suspect at least one time while the vehicle is moving."

When the SUV began to drive away, the second officer got into his patrol car and pulled in front of the SUV to block it. Once the SUV came to a stop, the two officers removed Beckwith-Bell from the SUV and began life-saving treatment until emergency medical services arrived.

Beckwith-Bell was taken to the hospital where he died.

Investigators recovered a firearm at the scene. Police learned the SUV where the confrontation occurred was reported stolen out of St. Louis City. Our partners at the St. Louis Post-Dispatch report the vehicle was stolen on August 6.