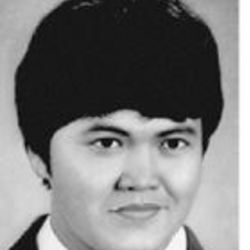 ANTONIO DUNSMORE was in a tight spot. Illuminated at night by the headlamps and spotlights of a half-dozen Seattle police cars, he stood backed up to a wall at Garfield Community Center. Eight Seattle police officers, guns drawn, safely hidden behind their blue-and-whites 20 feet away, shouted orders. "Hands over your head! On the ground!" Dunsmore didn't seem to understand. Decked out in an odd array— T-shirt, ski gloves and sunglasses—at one o'clock in the chilly morning, Dunsmore had been reported acting in an erratic and threatening manner. At the moment, he was making stabbing motions at the ground with a tiny knife and squinting into the lights.

With no other way out, a betting man might flop down and assume the position. But the sky was a different color in Antonio Dunsmore's world. Unemployed, he lived off a state mental disability payment, and at age 31 was still being watched over by his Filipino mother. The dramas in his mind left Lourdes Dunsmore's boy sometimes talking to himself, gesturing excitedly, disconnected from his surroundings—facts unknown to the anxious cops.

Then: "I saw the weapon. I saw the butt of the gun," officer Erik Warner would recall later. "He pulled something out of his pocket, which was the gun."

Police say Dunsmore took a shooter's stance. Officers were protected by their cars, the area was sealed off, and a police negotiator was on the way. "He was probably blinded by the bright spot lights" as well, says Dunsmore family attorney Nolan Wright.

But someone opened fire anyway.

It wasn't Dunsmore. Like his little knife, his gun, a clear plastic water pistol with multicolored innards, was a toy.

Officers say they thought it was a silver semiautomatic. In a blink, one began shooting, then another, then all eight. Chaos and sizzling bullets rained down. Within seconds, the cops had fired 25 shots. Dunsmore was hit at least 19 times. He fell backwards, limbs splayed, driven by the shots that splattered his blood in the hard white beams. As the gunsmoke drifted off, he lay perforated with 28 entrance and exit wounds.

Antonio Dunsmore was so dead that early April morning in 1995 that, his mother says, police didn't bother with first aid or attempt to revive him.

But then, it was Dunsmore's fault he got killed.

A six-member King County coroner's inquest jury would unanimously find the cop fusillade "unnecessary, but justified"—a fatal kind of catch-22: Dunsmore shouldn't have been killed, but it wasn't wrong for police to kill him. In effect, the jury concluded Antonio Dunsmore's wrongful actions got him rightly blown away.