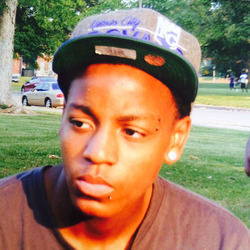 Antonio Martin, 18, who police say pointed a gun at the officer, was shot late Tuesday night at a Mobil gas station in Berkeley, Missouri, the St. Louis Post-Dispatch reports. The alleged victim's mother, Toni Martin, confirmed to the Post-Dispatch that her son had been shot by police.

The Berkeley Police Department officer responded to an employee's emergency phone call report at 11:11 pm of shoplifting by two men at a Mobil convenience store.  An unidentified officer arrived at 11:15 p.m. in his police cruiser and saw two men just outside the store who matched the description of the suspects.  When the officer went to confront the men, Martin drew his weapon before running away.  This gun was later recovered and logged as having five rounds in the magazine and one round in the chamber. Footage of the incident was captured by surveillance cameras outside the convenience store, and corroborated eyewitness accounts that Martin drew his weapon first.  The officer said that he was not wearing the body-camera issued to him and that the dash camera on his cruiser was most likely not recording.

Later that night and early the next morning, protesters were present at the crime scene, in some cases clashing with law enforcement trying to secure the scene.  Some of the protesters moved to Interstate 790, blocking traffic with their protests there.  Still others held a moment of silence outside of a nearby church.