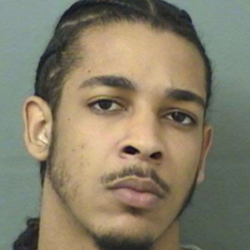 Deputies in St. Johns County, which is just south of Jacksonville, spotted Stoutt driving a white two-door Honda on Interstate 95 several hours after the killings on Wednesday and tried to pull him over. Stoutt refused and instead sped away.

During a chase involving law enforcement, Stoutt tried to avoid stop sticks along I-95 and ended up crashing into a median guard rail.

When deputies approached Stoutt's vehicle, they found him with an apparent life-threatening gunshot wound, according to investigators.

Stoutt was flown by medical helicopter to Orange Park Medical Center, where he eventually died from his injuries.

The Palm Beach County Sheriff's Office has not released the names of the victims.