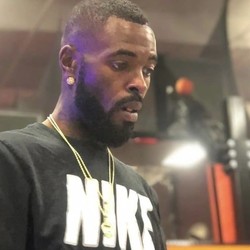 32-year-old Anthony McClain, a father of three was shot during a traffic stop near the intersection of Raymond Avenue and Grandview Street Saturday night.

“He’s like my son. That’s like my son laying right there … For him to die the way he died is senseless and there’s no excuse for it,” McClain’s Godmother Colyna Winbush said at the demonstration.

McClain and another man were pulled over for what police described as a vehicle code violation.

During the traffic stop, the passenger was uncooperative and then ran into the street while removing a firearm from his waistband, the Pasadena Police Department stated in its news release. The driver was cooperative, a department spokesperson told KTLA Monday.

An officer saw the weapon and opened fire, striking the man at least once in the upper body.

A handgun was recovered from the scene.

McClain’s godmother says he was shot in the back.

“If he’s fleeing from you … why would you shoot somebody in the back. That’s just a coward move across the board,” Winbush said.

The second man was arrested at the scene.

Body camera video obtained by KTLA Monday shows the moments after the shooting — when police deployed a taser and pepper spray.  Police say they plan to release the part of the footage that shows the shooting later this week.

On September 11, 2020, the Pasadena police chief identified Edwin Dumaguindin as the officer who fatally shot Anthony McClain during a traffic stop last month. The naming of the officer came after an autopsy revealed that McClain was shot twice — not once as initially indicated by police.