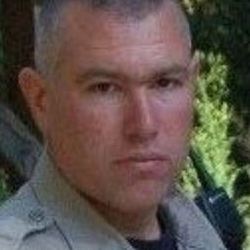 Sheriff Joey Terrell, Deputy William Zigan and another deputy responded to a domestic call in Clarkesville at around 7:30 p.m. The suspect's 16-year-old daughter called police from a nearby store. She told 911 operators that she escaped from the home.

As the sheriff officials drove to the residence, they saw a Ford Crown Victoria approaching them. The Crown Victoria turned into a yard and spun out. A man, believed to be former sheriff's office employee Anthony Giaquinta, got out of the vehicle.

The sheriff and deputies found the 16 year old outside the subdivision and made sure she was safe. They then went back to the residence.

At the home, sheriff's officials found a woman, later identified as Giaquinta's former wife, dead in a garage.

Zigan was posted outside of the home as Terrell and the other deputy began to search the area. Zigan was then ambushed by Giaguinta, according to Andrews. He was shot twice. Terrell was then shot in the right bicep when he entered the garage area. The uninjured deputy then fired back.