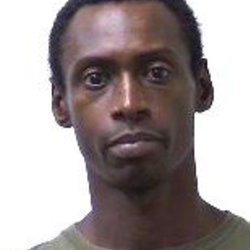 Anthony Dewayne Briggs, 38, was shot shortly after 10 p.m. at an apartment located at 11828 East Gateway Drive. He was taken to Huntsville Hospital, where he died of his injuries. Officers were called to the scene after Briggs got into a fight with his brother, 21-year-old Quinten Briggs, and cut him, according to police. The brothers both lived at the complex, but in different apartments. "Around 9:30 p.m., Anthony went downstairs to the apartment where Quinten and his mother live," Lt. Darryl Lawson, a Huntsville Police spokesman, said in a statement Tuesday. "He began banging on the door and yelling at Quinten to come outside. When Quinten opened the door Anthony began swinging a knife at him, cutting him on both arms. Quinten went back inside the apartment and locked the door to get away from him." Around that same time, downstairs neighbor Matthew Shane Hooks came outside to see what the commotion was, Lawson said. Anthony Briggs ran downstairs and began swinging at Hooks. Hooks retreated into his apartment and realized he'd been stabbed in the shoulder. He called 911. Police radio traffic from the time of the incident shows that a dispatcher called officers out at about 10 p.m. for a "cutting," and said, "Be advised, the offender is still present." Fire medics were also en route at that time. Two officers simultaneously arrived at the scene, at which time Anthony Briggs was back upstairs outside his brother's apartment. "When he saw the officers, he came charging down the stairs with the knife still in his hand, yelling and screaming at the officers," Lawson said. "The officers saw he had a knife and yelled back at him, commanding him to drop the knife and put his hands up. He refused to comply and continued to charge the officers until the officers were forced to shoot him."