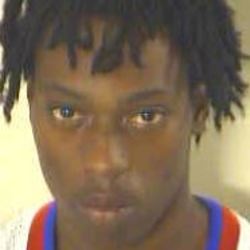 Late in the afternoon, the Atlanta fugitive squad was looking for a man wanted on aggravated assault charges, Lang said. The man was 27-year-old Anthony Callaway.

When a member of the fugitive squad saw Callaway, he fled into a nearby wooded area, East Point police spokesman Cliff Chandler said.

East Point police and Fulton County sheriff’s deputies set up a perimeter outside the wooded area near Washington Road and Desert Drive, Chandler said. Once a tracking dog arrived, the deputy and an East Point detective went into the woods to find Callaway.

When the officers found him, Callaway refused to show his hands, Chandler said. The deputy released the dog and Callaway immediately pulled out a handgun and shot at the dog and the officers, he said.

The deputy then fired on Callaway, killing him, authorities said.