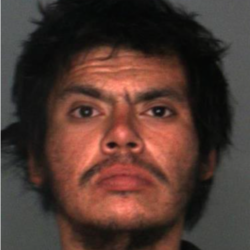 Anthony Angel Armenta, 21, of San Bernardino, was shot Saturday night outside a gas station convenience store in the city east of Los Angeles.

A report of a man with a gun sent officers to the station, where they saw Armenta and ordered him to drop what appeared to be a black handgun, police said.

According to police, Armenta instead pointed it at an officer and was shot by both officers at the scene, police said in a statement Thursday night. He died at a hospital.

The gun was found to be a replica, police said.

Cellphone video taken from a passing car and posted to YouTube captured officers pointing their weapons at a suspect near a gas pump and shouting for him to “drop the gun!” The vehicle rounds a corner and the camera shot is obstructed as a flurry of shots are heard.

The department posted on its Facebook page several frame grabs from videos at the scene. One from an officer’s body-worn camera shows a man with his arms extended pointing an object toward a parked police cruiser.

Armenta was seen using a flashlight to dig through the trash shortly before the fatal police encounter, and some witnesses said they believed officers mistook the flashlight for a gun.

A cashier at a convenience store across the street, told the Los Angeles Times the man frequently panhandled in the area.